Not Quite What I Was After

This was another of the Last minute request cards from the other week, I'd mentioned how my son always leaves it to the last minute to ask for a card, well this one wasn't quite what I'd planned but he and the recipient were pleased with it. 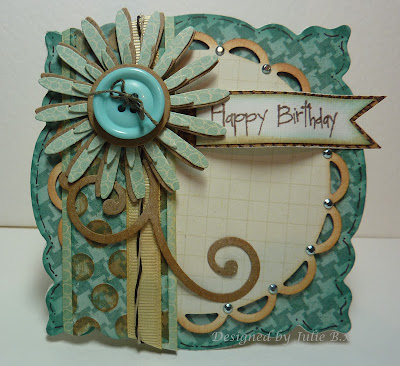 A few die cuts, some layers raised on foam, some embossing and inking, some nail heads and a shaped sentiment pretty much completes the card. except for some ribbon, twine and a lovely big button.
﻿ 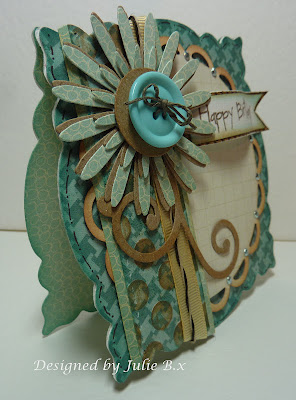 I also distressed the sentiment flag and added some inky stitching.﻿ 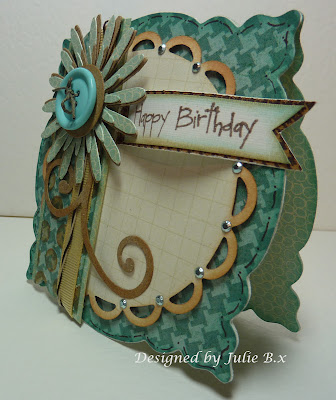 I'm using this card for the following challenges:-
CCC42, Not square,
Delightful Challenge, Stitching,
DYSU95, Embossing,
PCJ, Ribbon/twine,
PCC99, Ribbon,button,
House Of Gilli 44, Embossing,
MIM112, Anything goes.
Have a great weekend,
Thanks for stopping by,
Julie.x
Posted by Julie at 22:28 16 comments: Links to this post

As Simple As It Gets!

Hi there, I had a Birthday at the beginning of the week and have been thoroughly spoilt one way or another!
My Hubbie took me craft shopping before the event and I chose a couple of new Xcut dies amongst my goodies, One of which I used here to create my card blank using one of my other favourites to remove the aperture.
The gorgeous Floral Delights image was coloured oh so quickly using one of my other treats Polychromo pencils. I couldn't believe how much quicker it was than using my beloved Copics, need to get practising though! 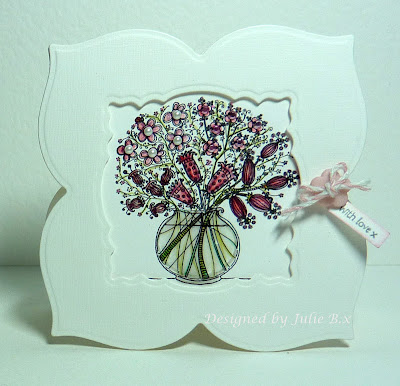 Sorry for the funny colour of the photos, we don't seem to have had proper daylight for days!
﻿ 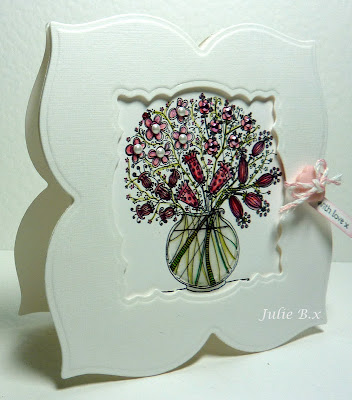 Don't you just love Tuesdays? It means that The Ladybugs are on form with a new challenge!
Now, Laurie's just flown back from her holiday somewhere nice and hot, just in time to host the new challenge and what do you think the first thing she said to us was?
" I NEED A P!"
That's the name of her challenge theme!
I ask you lol!
So here's what I did for my DT card,if Laurie wants a P, I'll give her six! Can you see them all?
Patchwork, polkadots, patterned papers,pearls, paperpiercing and polychromo pencils! Well,only a touch of the pencils, it was mainly Copics!
The image is one of the original Floral Delights.
Sunflower Delights. 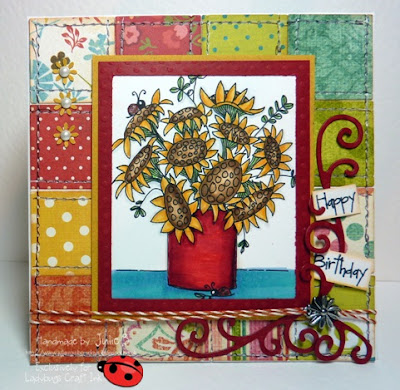 Hi all, what a dreadful day it is where I am, horrible,drizzly,dark and miserable! I'm hoping that wherever you are, you have blue skies and sunshine!
Send some my way :) 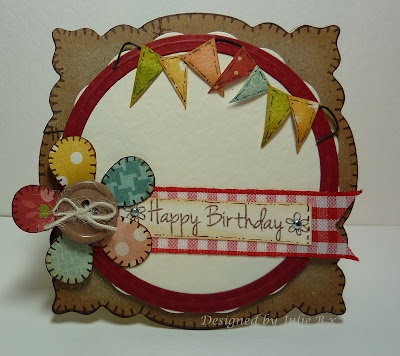 I'm rather pleased with my offering today, a little bit of a summery feel to it.
﻿ 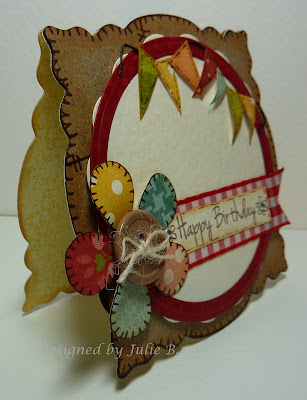 I've not done any bunting for a few posts and as I've recently been awarded the title of
"Queen Of Bunting"
by the lovely Kerry, it gave me the kick up the pants that I needed! 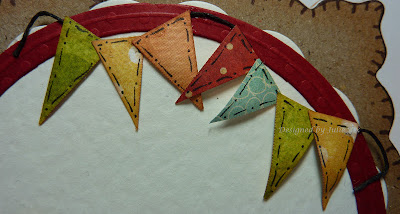 I must confess that I just love the look of the hand cut bunting, the last time I added it to a card I used a stamp and I just wasn't so pleased with the look.
﻿ 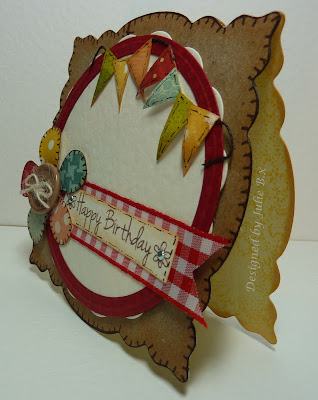 I think that hand cut is much easier on the eye. My favourite bit of the card though has to be my patchwork flower,made using some of my favourite paper remnants, I just love it, look out for more of these, they could take over from the bunting lol!  Check out the nailhead peeping out from behind my flower. 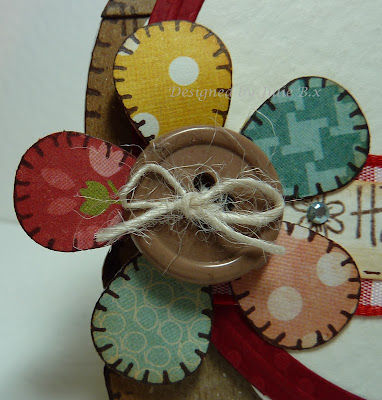 Yesterday I had planned an evening of craft, ready for me to share several cards using this gorgeous New Digi,
"Watering Can,Tulips Delight"
My computer mouse had other plans though,
the battery went flat so it was late before I was able to get printing out my images,
leaving me only enough time to make the one card.
This tiny 3"x3" card in fact looks better in real life, it doesn't show up here but the fancy xcut frame is raised on foam pads and frames the tiny coloured image perfectly. A touch of glossy accents, some stickles and some nailheads.
Now, I've recently been accused of living in a cave, I hadn't seen nailheads and assumed they'd be, well, that they'd resemble nailheads and be dull and boring.
How wrong was I! They are gorgeous, and if you happen to call by LCI, Kerry is stocking them along with all the other scrummie embellishments.
﻿ 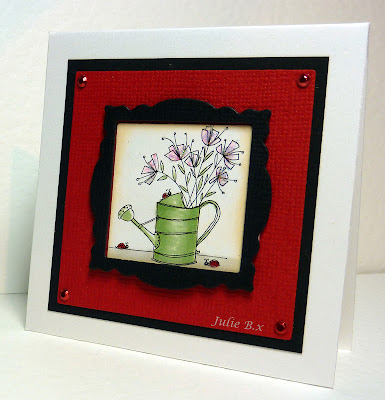 Hi all, just showing you a quick card for an older teenager.
Rather a lot of inky distressing was involved along with some embossing, some staples and some brads. 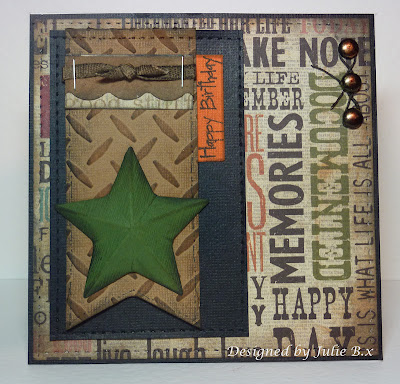 A die cut star, folded into shape and inked, a lot of paper piercing with the old pattern making tool, some tape and some string saved from some new clothing tags and the card is completed.
﻿ 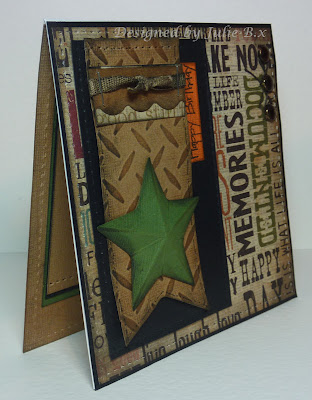 There's not a lot to be said about this card, I'm afraid it was a bit of a rush job and I'm a bit cross with the fact there is a tiny slither of the white card base peeping out from behind the purple. I never realised until the glue was completely dry, isn't that annoying!
﻿ 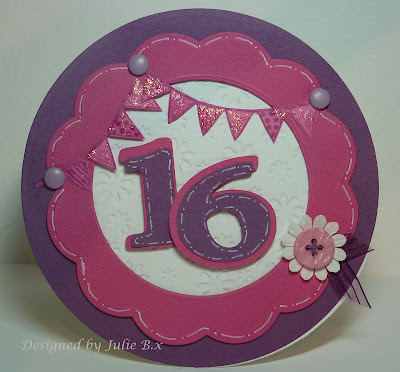 I thought I'd ink up my forever friends bunting from an Easter stamp set, looks ok but I think I'll stick with my usual style of bunting, it's much more dimensional and easier on the eye me thinks!
﻿ 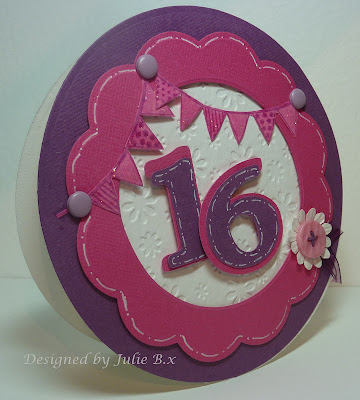 There's a new challenge theme at Southern Girls and its Lou's team in the spotlight this fortnight This is the debut for the new members to the team. We have another great theme for this fortnight,
"Tie a ribbon round it"
As usual Lou and Trace have come up with some great sponsors, check out the challenge blog for full details!﻿
I've made my DT card using an image from one of the sponsors, Bugaboo, the super cute image is
"Little Penguin Winter Skate" 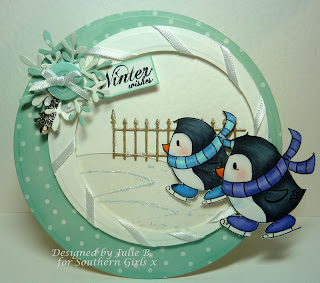 As I used the png version of the image I was able to layer two sizes of the image together before colouring using Copics.﻿ 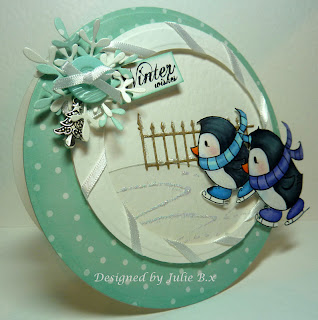 I used a piece of acetate to resemble ice and drizzled some threads of "Stickles" to act as skate marks. 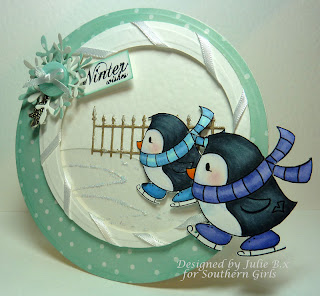 I'm using this card for the following challenges:-
Anything Goes 77, Animals,
Papertake Weekly, All creatures great and small,
TTT87, Wings,
Forever Friends,Right Hand Vertical line,
MIM, Anything goes,
Robyns Fetish 128, Circles.
Thanks for stopping by,
Julie.x
Posted by Julie at 20:59 22 comments: Links to this post

Morning all, It's my turn to host Totally Ladybug Tuesday this fortnight!
There's a new Digi release today
"Floral Delights Too"
The theme for this fortnight is
"Embossing and Flowers" 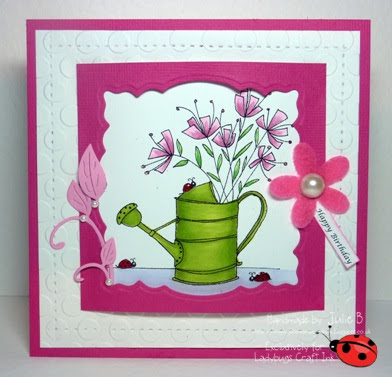 I coloured up my gorgeous image,
"Watering Can Tulip Delights" using Copics
﻿ 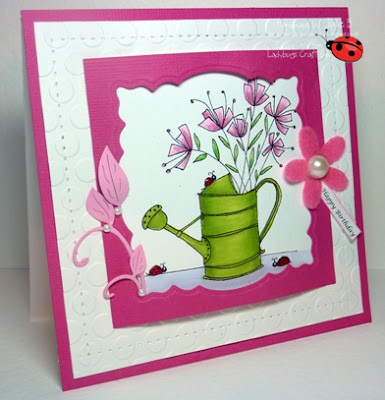 I embossed my white cardstock using a large dot embossing folder and added a touch of glossy accents to the coloured bugs. ﻿ 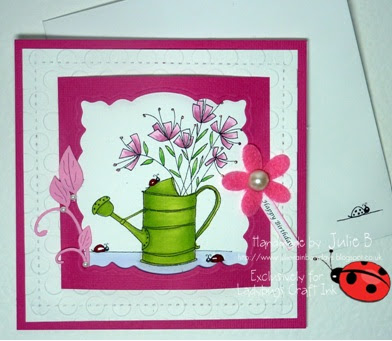 I thought it would be fun to add the Ladybug from the image to the envelope. This is such an easy thing to do, I just used copy paper to print out the image moving the digi so that it appeared to the bottom right hand side of the sheet. Once this was done I positioned my envelope over the printed image working out where I wanted the bug to be and used masking tape to hold it in place a post it note was then placed over where the rest of the image would print. (It's a good idea to remove some of the sticky from the masking tape so that it doesn't mark the envelope when it's removed, this can be done by simply sticking it to your clothing first so that it picks up a little of the lint)
I have to say that I love this image, I'd hoped to have had time to show you a selection of ways that you could use it, I'll do my best to find time before next Tuesday and add them to a reminder!
﻿ 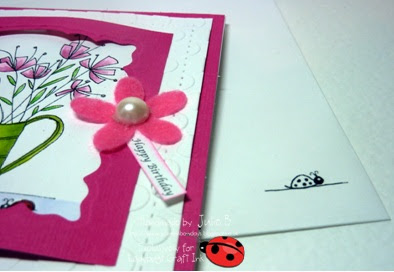 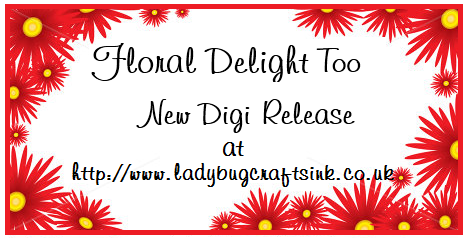 Here Tomorrow At 9am!
See you there!  :)
Thanks for stopping by
Julie.x
Posted by Julie at 16:31 No comments: Links to this post

What is it with teenagers, why do they leave everything till the last minute! Mine certainly do, today isn't the first time I've been given a last minute request for a card and I'm sure it won't be the last! Of course, like most card creators out there, I've got piles of cards made and ready to go but why is it that there is never a suitable card amongst them to meet the needs. lol!
Anyway, you've probably seen similar cards amongst my posts but the colours here are a bit different for me as apparently my son's friend "isn't into pink!" 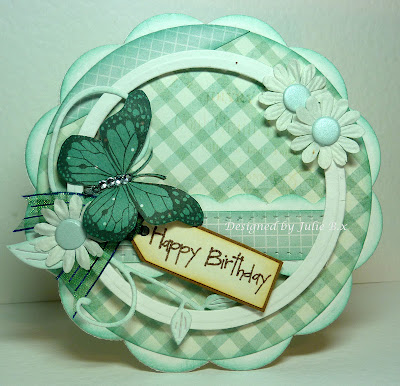 I'm using using this card for the following challenges:-
AGOAC56, For the girls,
Catch The Bug, Anything goes,
Crafty Mess, Anything goes,
Guylous, To die for,
PolkaDoodles 40, Wings,
TSM40, Butterflies,birds,bees,
TPFC137, Shapes.
Thanks for stopping by,
Julie.x
﻿
Posted by Julie at 21:12 24 comments: Links to this post

Please grab this Poster and add it to your side bar!
The Ladybugs don't want anyone to miss out on the fun!
Have a great day!!!!
Thanks for stopping by,
Julie.x
Posted by Julie at 09:00 No comments: Links to this post

A while back I received a gorgeous package of scrummie crafting goodies from the lovely
Nancy from the Fiber Bubble.
What a sweet lady she is, chances are that we will never meet yet she knows me so well! It was Nancy that introduced me to the idea of layering buttons so it seemed fitting that I should use a couple on the thank you note I sent her. 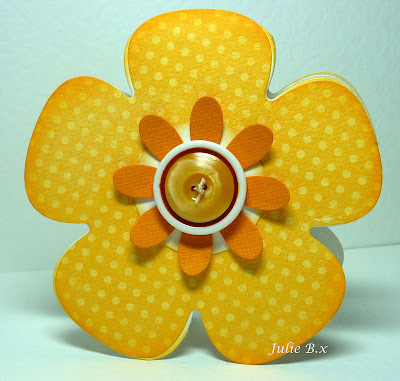 As luck would have it,the tiny card fitted just perfectly in the Spellbinders Grand Calibur Hexagon Petal Envelope, a die my husband treated me to ages ago but have never yet used. 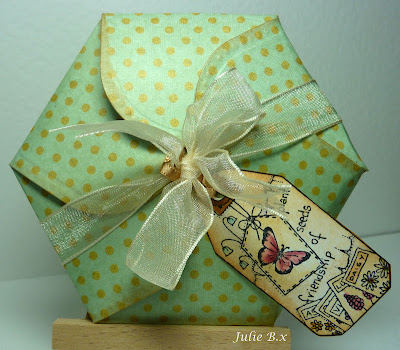 I'm using this note and envie combo for the following challenges:-
Papertake Weekly, Anything goes,
TTCRD38, Anything goes,
MIM109, Anything goes.
A quick bit of news before I go, Kerry had a few technical problems during the week of her "Stamp Sale" so to make up for it she has decided to extend for another week! Don't miss out!!!!!
Thanks for stopping by,
Julie.x
﻿
Posted by Julie at 20:55 10 comments: Links to this post

Julie
I am a married mum of 3 who loves to craft, I love to make cards and sew but will turn my hand to anything creative. I'm lucky to have been on 4 talented design teams but at the moment due to time I am committed solely to Lavinia Stamps. I am so very grateful to everyone out there who has shared their knowledge and computer skills with me as this blog would not survive without you.

Proud to have been a Ladybug 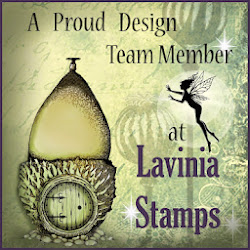 Some Of My Favourite Blogs